Analysis of the Fiscal Sustainability of State Government

Analysis of the Fiscal Sustainability of State Government

Economists talk in terms of whether a phenomenon is cyclical or structural. High unemployment, for example, can be a cyclical problem when uctuations in economic activity trend downward—many laid-off workers will be rehired when the cycle resumes an upswing. Structural unemployment, on the other hand, happens when underlying conditions change fundamentally, resulting in a mismatch between the demands of the labor market and how the labor force has been trained. This can lead to a prolonged period of high unemployment.

Colorado’s budgetary woes are both cyclical and structural. The extraordinary revenue shortfalls that have plagued state government for much of the last decade were caused, in large part, by two extreme economic downturns, the latter of which was, by many measures, the worst since the Great Depression. When the economy improves, tax collections will pick up. But absent major changes in policy, a structural imbalance underlying the fiscal workings of state government will ensure that Colorado’s budget problems persist for many years to come.

The bottom line is this: Even a strong recovery and sustained job growth over the next decade and a half will not produce enough income and sales tax revenue to afford Colorado’s share of Medicaid funding and the state’s payment for public schools under current constitutional and statutory provisions. Together with the rising (although more stable than in the past) cost of the state’s prison system, the two biggest programs in the state General Fund will continue to crowd out higher education and other programs competing for the same tax dollars.

The Center for Colorado’s Economic Future created models that projected General Fund revenues and costs for the three largest General Fund program areas—K-12 education, Medicaid and corrections—from FY 2011–12 to FY 2024–25. Our forecasts show that the state’s annual expenditures for Medicaid medical services premiums will nearly triple during that period (184 percent). What the state pays every year to help fund public schools will more than double (118 percent). General Fund tax collections, however, will grow only 86 percent. 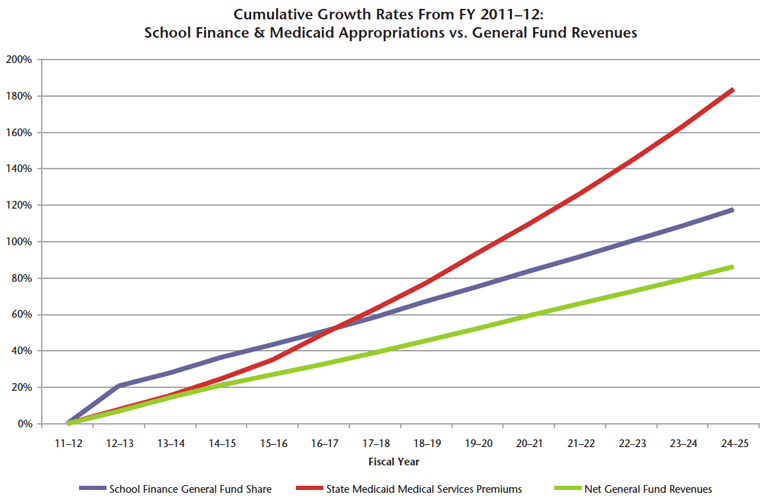