Assessing the Economic and Budgetary Impact of Medicaid Expansion in Colorado

Assessing the Economic and Budgetary Impact of Medicaid Expansion in Colorado

In 2013, the Colorado General Assembly passed, and Gov. Hickenlooper signed, Senate Bill (SB) 13-200 authorizing the expansion of Medicaid under the 2010 Affordable Care Act (ACA). Colorado is currently one of 32 states (including Washington D.C.) to implement Medicaid expansion after this ACA provision was ruled optional by the U.S. Supreme Court in its 2012 decision for National Federation of Independent Business v. Sebelius. This expansion allowed low-income Coloradans at or below 138 percent of the federal poverty level (FPL) to enroll in Medicaid regardless of their age or parental status.

The Colorado Health Foundation engaged the Colorado Futures Center at Colorado State University to conduct an independent analysis of the full economic and state budgetary impacts of Medicaid eligibility expansion. This research updates a 2013 analysis of the projected impact of Medicaid expansion. The 2013 study was completed before Colorado opted to expand Medicaid. With the passage of SB 13-200, many of the unknowns in the previous analysis are now known including the rate at which Coloradans would enroll in Medicaid and the source of funding for the state match. Now, with two years of experience in Colorado, this updated study looks at actual results of the expansion and forecasts the economic and budgetary impacts out to FY 2034-35. 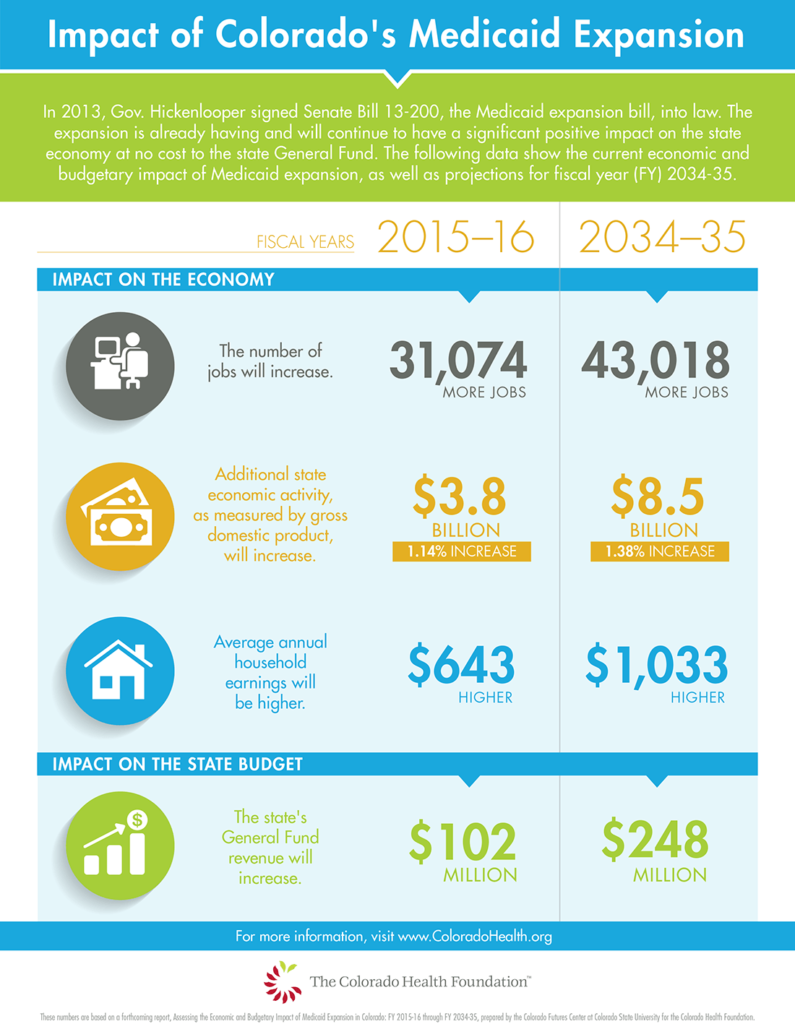 According to Colorado’s Medicaid agency, the Department of Health Care Policy and Financing (HCPF), the Medicaid expansion will cover 398,941 1 additional Coloradans in fiscal year (FY) 2017-18, the last FY for which HCPF provides caseload forecasts. Total FY 2017-18 spending on these additional beneficiaries is forecast to be slightly more than $1.75 billion, 94.5 percent of which will be paid for with federal dollars. As specified under the ACA, the federal government will cover the entire cost of expansion for states expanding Medicaid for the years 2014-16, after which, the federal share will gradually reduce until 2020 when the federal government will contribute 90 percent of the total cost of coverage, thus capping the state’s responsibility at 10 percent. SB 13-200 dedicated the Hospital Provider Fee (HPF), a fee paid only by hospitals and separate from the general revenues which fund much of state government, as the source of funding for the state’s responsibility. Collectively, these decisions have had two major fiscal and economic effects in Colorado: