Economists talk in terms of whether a phenomenon is cyclical or structural. High unemployment, for example, can be a cyclical problem when fluctuations in economic activity trend downward – many laid-off workers will be rehired when the cycle resumes an upswing. Structural unemployment, on the other hand, happens when underlying conditions change fundamentally, resulting in a mismatch between the demands of the labor market and how the labor force has been trained. This can lead to a prolonged period of high unemployment.

Colorado’s budgetary woes are both cyclical and structural. The extraordinary revenue shortfalls that have plagued state government for much of the last decade were caused, in large part, by two extreme economic downturns, the latter of which was by many measures the worst since the Great Depression. When the economy improves, tax collections will pick up. But absent major changes in policy, a structural imbalance underlying the fiscal workings of state government will ensure that Colorado’s budget problems persist for many years to come.

The bottom line is this: Even a strong recovery and sustained job growth over the next decade and a half will not produce enough income and sales tax revenue to afford Colorado’s share of Medicaid funding and the state’s payment for public schools under current constitutional and statutory provisions. Together with the rising (although more stable than in the past) cost of the state’s prison system, the two biggest programs in the state General Fund will continue to crowd out higher education and other programs competing for the same tax dollars.

The Center for Colorado’s Economic Future created models that projected General Fund revenues and costs for the three largest General Fund program areas – K-12 education, Medicaid and corrections – from FY 2011-12 to FY 2024-25. Our forecasts show that the state’s annual expenditures for Medicaid medical services premiums will nearly triple during that period (184 percent). What the state pays every year to help fund public schools will more than double (118 percent). General Fund tax collections, however, will grow only 86 percent. 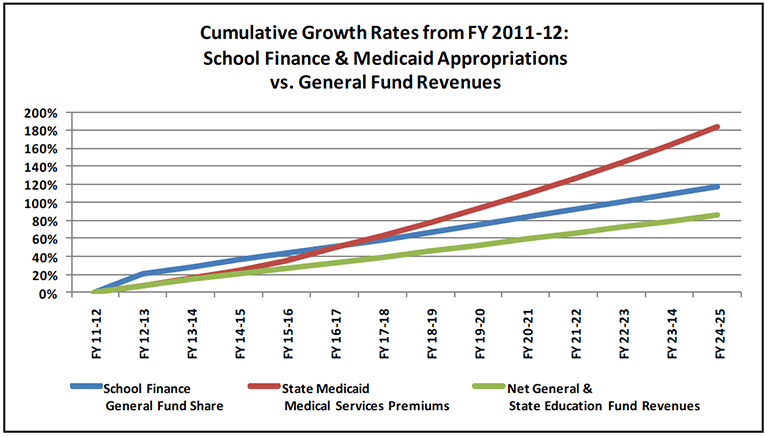 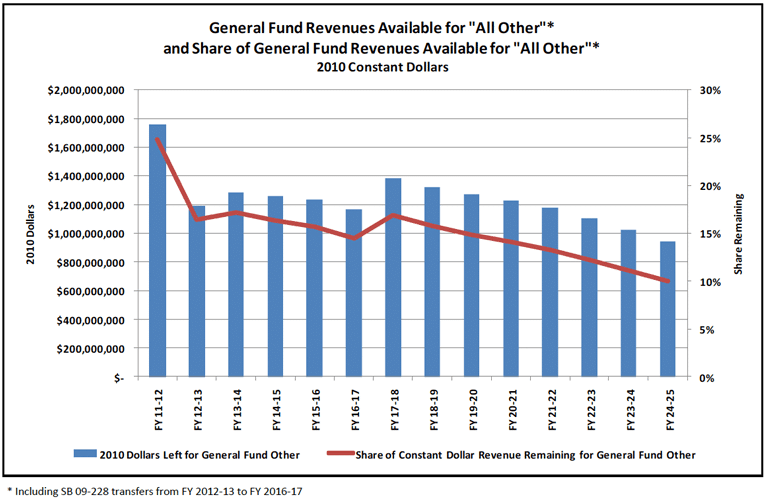 After increases for schools, Medicaid and corrections are funded, the share of the General Fund left over for other programs will be cut by 60 percent over our forecast period. Not only will the nominal amount of dollars remaining for higher education, human services, the court system and other programs drop, but the purchasing power of those dollars will fall by about 46 percent due to inflation. Meanwhile, Colorado’s population is expected to rise about 26 percent, to more than 6.7 million people. That will mean more college students, more court filings, higher caseloads in the Department of Human Services, and so on. Some of these programs will grow at rates greater than inflation as measured by the Consumer Price Index.

We project that General Fund diversions for transportation, capital construction and reserve increases will be triggered in FY 2012-13, as required by SB 09-228, due to a rise of more than 5 percent in state personal income. The diversions will continue for five years, expiring after FY 2016-17, leaving no continuing General Fund support for these purposes. Money available for programs other than education, Medicaid and corrections will be even less if state legislators and the governor continue the General Fund diversions. Our forecasts show that all “new money” – the amount of growth in revenue each year over the prior year’s revenue – will be consumed by schools, Medicaid and corrections for nine years beginning in FY 2016-17.

Colorado cannot expect to grow its way out of its budget problems. The Center’s state economic model, which is largely based on national economic indicators forecast by Moody’s Economy.com, shows a healthy recovery from the current economic downturn with rates of job growth commensurate with the recoveries of the late 1980s and mid 2000s and sustained job growth through 2025. However, that level of economic activity will fail to generate revenues sufficient to keep pace with the major programs driving General Fund expenditures. From FY 2011-12 to FY 2024-25, our projections show state K-12 education costs growing at a compound annual rate of about 6 percent and Medicaid expenditures growing more than 8 percent annually. But General Fund revenues will grow at a compound annual rate of only 5 percent over that period. From this we conclude that the state budget faces a persistent structural imbalance. 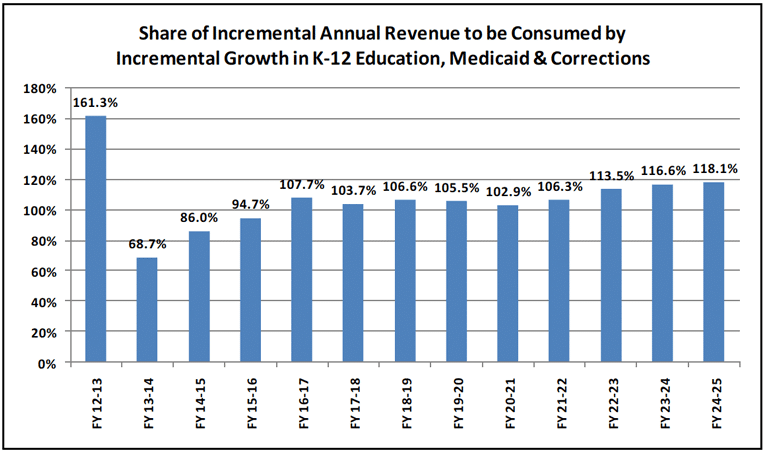 The Center’s revenue model was generated econometrically by separately forecasting each major tax revenue stream and combining them into a General Fund total. The tax revenue streams were forecast using parameters estimated from a series of structural relationships between the historical performance of each tax and major macroeconomic indicators. On the expenditure side, the K-12 model projected the state share of education costs using a simulation that incorporated the mill levy freeze enacted in 2007, the expected performance of local property taxes and funding requirements resulting from school enrollment growth and inflation. Medicaid was forecast by first separately projecting caseload growth by recipient categories based on State Demography Office population projections. The Congressional Budget Office’s national cost growth projections for Medicaid were then applied to these caseloads to forecast the total growth of medical services expenditures. Corrections expenditures are based on a prison population forecast that takes into account recent changes in sentencing laws and grows with the population of males ages 18 to 30, as projected by the state demographer.

Among our study’s other findings:

The long-term, persistent structural imbalance between General Fund revenues and expenditures will not be corrected without structural solutions. Below are the policy directions we have identified and will pursue further in the next phase of the project: