TABOR Has Increased School Property Taxes For Most Coloradans

More than 80 percent of Coloradans pay more in school property taxes than they would if voters had never enacted the Taxpayer Bill of Rights, according to a study by the Colorado Futures Center at Colorado State University and published by the Lincoln Institute of Land Policy, a nonpartisan think tank. Read the Executive Summary for an overview of the findings and a Q&A with the researchers.

Most people think that Tax and Expenditure Limits (TELs) keep taxes and government spending lower than would be the case without them. However, a recent study by the Colorado Futures Center at CSU, supported by the Lincoln Institute of Land Policy, showed that the majority of property taxpayers in Colorado now pay more in school property taxes due to two provisions in the state’s Taxpayers Bill of Rights (TABOR) passed in 1992. When the impacts of Colorado’s TELs intersect with Colorado’s complicated school funding formula, embodied in the Public School Finance Act of 1994, the results are surprising.

The study was commissioned to examine the impacts of Colorado’s TELs on how property tax burdens and state public school finance act support are distributed among Colorado’s 178 school districts.

Four major questions about the effects of the TELs emerged during the course of the study:

Key findings from the study were that:

Finding 1 — Taxpayers in 74 of the state’s 178 school districts currently pay more in school property taxes than they would if TABOR were never enacted.

How Can TELS Result in Higher Taxes?

Several factors affect the way in which Colorado’s TELs impact school funding. It’s a complicated story that requires a little background. Colorado’s school districts are extremely diverse, ranging from large urban centers with nearly 85,000 students enrolled to small rural districts with fewer than 50 students. Second, the property tax bases of Colorado’s school districts are also diverse, ranging from a high of $3,722,144 of assessed value backing each pupil to a low of $16,028 backing each pupil, a disparity of 232 to 1.  Third, even greater diversity is shown by the dynamics that occur in school districts over time. Since the enactment of TABOR in 1992, some districts have experienced increasing enrollment, some declining enrollment, while others have experienced cycles of enrollment growth and decline. Fourth, the economies and local property tax bases of the state’s 178 school districts have also changed dramatically. In some areas, recreational and leisure industries have caused growth, while in other areas, natural resource development and production has ebbed and flowed, metropolitan communities have spawned the creation of exurbs, while population has grown and declined in various communities. On top of these factors, the state’s economy has weathered boom and bust cycles each affecting local communities differently. Certainly, changes in the composition of Colorado school districts have been anything but uniform throughout the state.

A final piece of the puzzle is the state’s Public School finance Act of 1994. The act increases a base per pupil funding amount each year as required by the constitutional provisions created by Amendment 23, then applies three factors to the base amount in recognition of individual school district circumstances. These factors adjust for each school district’s enrollment size, its cost of living and the number of “at risk” students enrolled. The adjusted per pupil funding of each district is then multiplied by the number of students enrolled to determine each district’s total allowable funding. The difference between the amount the local mill levy raises and the district’s total allowable funding is then “backfilled” with state aid.

When the ingredients of significantly changing school district enrollment and economic characteristics, complicated TELs, and the state school finance act are mixed together, unexpected results occur. Generally, the mill levies and property tax collections of some significantly changing districts have plummeted much faster than more gradual declines in most other school districts. The plummeting levies of these districts have caused them to receive more of a state aid “backfill” than would have otherwise been the case. These circumstances work in a way similar to the creation of a state subsidy for some school districts to maintain extremely low mill levies while they have enjoyed more of their school costs being paid for by the state. Since the state has a limited pot of General and State Education Fund revenue to pay for these subsidies, the funds must come from state aid distributions other districts might have received.

While there are a myriad of circumstances causing declining local levies and the resulting shift in funding burdens, the following scenarios depict the most common circumstances:

The scatterplots below show the evolution of levies and state share from the first year TABOR took effect for school districts to the current year. Note the increasing number of districts levying fewer than ten mills and the shift toward increasing state share. Data Source: Colorado Department of Education

The scatterplots show that due to increases in property values over the past 21 years, the “uniform school levy” (now called the “maximum levy”) was reduced from 40 mills to 27 mills over the period, a 32.5% reduction. In 1993-94, only 2 districts levied less than 10 mills for schools, Gilpin and Aspen. By 2014-15, both districts experienced mill levy reductions of 44% and 48% respectively, and both experienced increases in state aid of 21 and 27 percentage points respectively. In addition, by 2014-15 these two districts were joined by 19 other districts, 15 of which also experienced large increases in state aid. Most notable in the group is the Primero school district, with a 96% reduction in its levy (from 40 down to 1.68 mills – the lowest in the state, but with a 19 percentage point increase in state aid over the period (from 63% funded by the state to 82% funded by the state). The table below provides data for the 21 school districts with school levies less than 10 mills in FY 2014-15.

How Great is the Impact?

In order to determine the impacts of the mill levy and property tax revenue limits of TABOR on Colorado public school property tax and state aid distributions, we built a model keeping state aid, all provisions of the school finance act, and other data constant, but eliminated TABOR’s mill levy and property tax revenue limits. The model showed that absent these provisions of TABOR, assuming the current state share appropriations and current school finance law, the uniform levy would be 22.888. That is, without TABOR’s effect on the local levies in the subset of districts identified above, most districts would levy 22.888 mills locally for schools. Those that would levy fewer than 22.888 mills would receive no state aid; the local levy would be sufficient to fund the full school finance program budget.

Geographic Representation of the Change in Median Property Taxes: TABOR vs. no TABOR Simulation 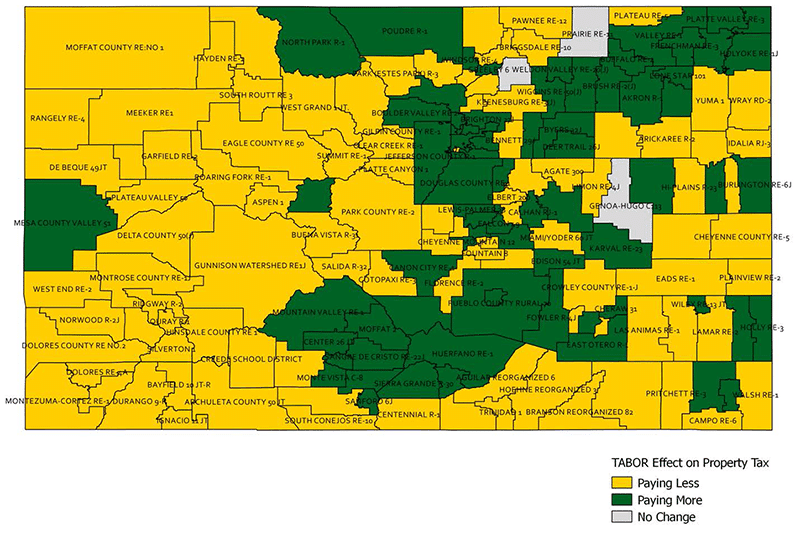 Finding 2. District level funding disparities increased as the use of local override property tax levies became increasingly prevalent in those districts whose base effective property tax rate was reduced partially due to the property tax limit in TABOR.

The Use of Override Levies 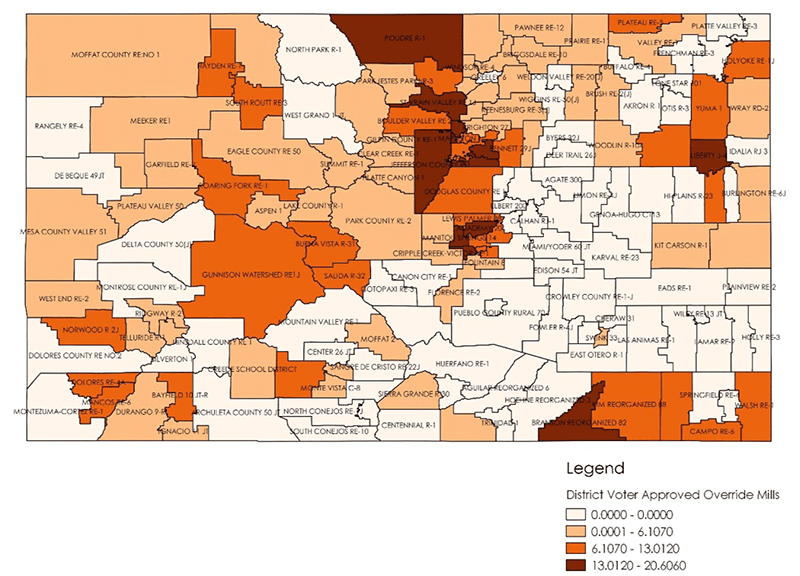 Instead, the use of override levies is explained by demographic and TABOR related variables. Our regression analysis shows that some of the variation in the use of overrides comes from demography; districts with overrides are larger and contain more highly educated households as measured by the educational attainment of the head of household. However, demography does not tell the whole story. Overrides are also more heavily used in the districts whose base school effective property tax rate has fallen, partially due to the local property tax and mill levy limits contained in TABOR. In essence, falling effective rates made “room” in the property tax in those districts which were the beneficiaries of the very low base levies. Nearly half of the districts levying less than 10 mills are in the highest quartile for income in the state. The relationship between falling effective property tax rates for base school levies and the use of overrides may be resulting in wealth related spending disparities in public school finance across Colorado.

Finding 3. As measured by effective tax rates, local property taxes to support base school programs have become more unequal since the passage of TABOR.

Representation of the Change in Effective Rates: 2000 to 2014 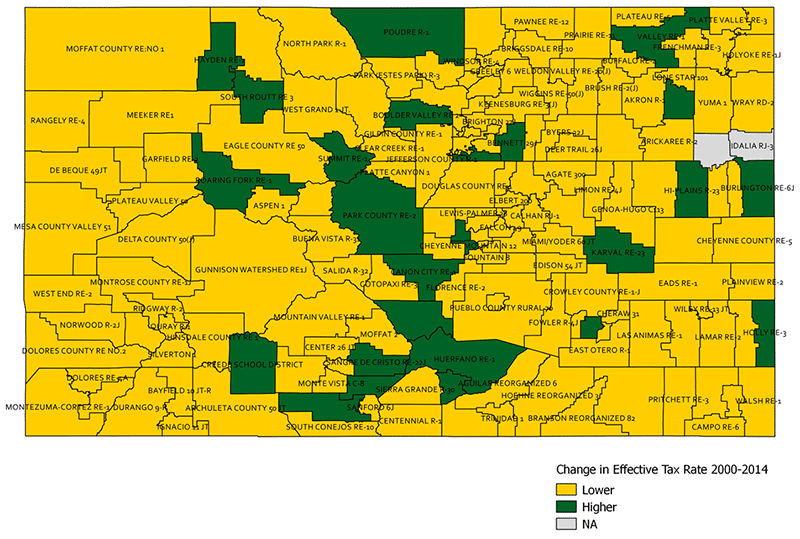 Shown graphically below, initially the 1994 Act brought down rates and inequality across districts. However, this soon reversed and has resulted in a generally widening variation, as measured by both the spread and the standard deviation of effective rates. Since 2000, the school property tax burden across Colorado has become more unequal as subsets of districts have had their levies driven down by TABOR.

Taxes are more regressive if the share of income dedicated to paying the tax increases as income decreases. That is, if higher income taxpayers dedicate a smaller share of their income to paying a tax than the share dedicated by lower income taxpayers, the tax is regressive. Because TABOR forced down mill levies in many higher income districts, local school property taxes have become more regressive since the passage of TABOR.

The graph below shows the coefficient on household income for a series of equations examining the relationship between effective tax rates and household income in 1990, 2000, 2009 and 2014. If the system were gaining progressivity, there would be a larger positive relationship between effective rates and household income over time and the values would be getting larger over time. Instead, for the base levy, that value has fallen since 1990. Total school levies, which represent the totality of levies and include the sometimes large override levies for school programs and bond levies for debt service on capital, also became steadily more regressive.

It is notable that the only levy that has become slightly more progressive is the override levy. This suggests that wealthier districts are heavier users of override levies, perhaps leading to widening district level funding disparities as is discussed in Finding 2.

It is very unlikely that the school district property tax revenue and mill levy limits in TABOR were ever intended to create distortions in school levies. These distortions have resulted in higher levies in large districts while at the same time subsidizing extremely low levies in others, provided incentives for beneficiary districts to receive mill levy overrides, and created a more unequal increasingly regressive system of local property tax support for schools. These outcomes occurred because the two limits in TABOR affecting school district property taxes do not recognize the variety of changes in tax base
characteristics and other circumstances that happen over time in the state’s highly diverse school districts.

Policymakers, including elected officials in the legislative and executive branches of state government as well as local school boards alone are powerless to address these problems because they are embedded in the state constitution. Constitutional provisions may only be amended by the voters. Compounding the problem is the sheer complexity and geographic variation in the dynamic underlying these distortions. This makes the story extremely difficult to convey.

But, while these factors make corrections to the school funding system extremely difficult, hopefully it is not impossible. Policymakers and community leaders need to reach out to voters to build awareness of the problems and issues resulting from the property tax revenue and mill levy limits in TABOR so that viable solutions can be found and supported by voters. We hope our findings provide a starting point for this important conversation.